This is Part II of a series examining a proposed ordinance that would require every business in Detroit open after 10 pm to participate in Project Green Light. For a description of Project Green Light (the reality, not the hype) see Part I.

Project Green Light (PGL) isn’t a finished product. The Detroit Police Department (DPD) and the 123 businesses currently enrolled in the program are apparently still working out best practices. Despite that, the Mayor and DPD praise the results, citing both statistics and several high-profile arrests facilitated by PGL. I’m going to do a more complete breakdown of PGL’s stats in a few weeks; I’m requesting some information from DPD and the State. Until then, let’s put a few things into context.

Detroit’s crime rate, particularly for violent crime, is among the highest in the nation. However, it has been dropping steadily for several years.  Between 2014 and 2016, DPD made numerous changes in how they police the city, but a few stand out.

First and foremost, Detroit hired more police officers. Credit to them. Despite Detroit’s population decrease over the years, the city has physically remained the same size. When a major citizen complaint is a lack of police presence, increasing the size of the police force makes sense. Additional revenue (some from the bankruptcy savings, some from finally complying with a Department of Justice consent judgment, and some from a better economy) made the hirings possible.

During this period the city also incorporated a weekly COMPSTAT process “as a tool to identify crime trends within precincts and develop proactive policing approaches to abate those spikes in crime.” Other cities do this and it seems to work.  A big part of it is holding police brass responsible for crime in their precincts. Similarly, DPD finally followed best practices and began its NPO (Neighborhood Police Officer) Program.  “These are designated officers who are specially trained and placed in specific sectors within Precincts.  These officers concentrate on quality of life issues such as blight, noise complaints, neighbor disputes, etc. “ It’s part of community policing and, again, it seems to work across the country. Chief Craig himself “credits an improving relationship with Detroit residents and businesses, as well as the improved morale of police officers, as helping to drive crime numbers down.”

Let’s give credit where credit is due. DPD is working hard to do better. But let’s not get crazy. Aside from a few outliers (e.g., Chicago) crime, violent and otherwise, has dropped across the country. The reason Detroit still ranks among the most dangerous places in the country despite consecutive years of double-digit drops in the crime rate is that the rest of the country has experienced similar declines. 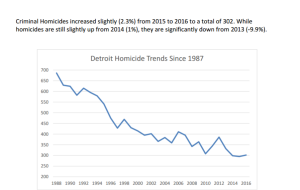 As you can see from the charts above, Detroit’s murder rate has pretty much followed the national trend. It’s the same with violent crime in general. Clearly Detroit has experienced a reduction in crime that has nothing to do with PGL but rather is part of a nationwide trend.  The reductions happened before PGL came online and continue in places that aren’t involved in the program. Of course, that doesn’t mean PGL hasn’t lowered crime. So let’s take a closer look at the PGL partners and how they’ve fared.

In January of 2017, when the 100th business joined the program, Mayor Duggan’s office claimed PGL was responsible for a 40% drop in crime at the original 8 participating locations, with double digit drops elsewhere:

I believe sentences should be read and taken apart with the same care that they were written.

“Since it was launched, Project Green Light has helped to bring about sustained reductions in violent crime at or near participating businesses.

Examining this in terms of cameras, not increased police presence, you’ll notice a few things. First of all, increasing police patrols near a business is going to reduce crime whether you put cameras there or not.  Secondly, I bolded some curious phrasing – “at or near.” How close is “near”?  This is relevant because the further away you go from the PGL partner, the less you can attribute the drop to the presence of cameras and the more you should consider the role of increased police patrols.

The difference between the reduction for original partners and later partners might also be explained by a difference in monitoring.

Although DPD doesn’t have an obligation to ever monitor the cameras, it seems likely that those 32 cameras were frequently viewed live during the initial rollout of the program. From the start PGL was sold as a “real-time” crime prevention program. With only 32 cameras to monitor, that is a realistic objective. As the number of cameras increases, live monitoring becomes less feasible. Remember, every new partner brings at least 4 additional cameras online. It is possible that cameras are most effective when monitored live. That seems to be the opinion of at least one gas station owner:

Two days in a row we are getting robbed. And I have a camera inside the store where Detroit police are supposed to be watching it — live.

But even if monitoring live makes a difference, without knowing the makeup of the new PGL partners and comparing the crime reduction they experienced with that at similar businesses that didn’t participate, it’s impossible to know whether that 20% is related to Project Green Light at all!

I know Detroit has a crime problem. I live on a block with 4 houses left standing, 2 of them burnt out shells. I have bars on my windows, a monitored security system, and personal protection devices. (You don’t have to wear a jacket, but uninvited visitors best wear a vest.)  I’m all for new ideas to address crime. What I want to get across is that we don’t know if Project Greenlight prevents crime. Nothing we’ve heard from the Mayor or DPD proves that it does. The 40% and 20% numbers that are getting thrown around by the Mayor and DPD are meaningless. If PGL doesn’t work, I want to see the money and energy going into something that does – like increased resources to build real community safety. Affordable housing. Mental health services. Better education.

If City Council is going to give DPD cameras all over the city and require business owners to pay for them, Detroit residents, the people this project is designed to protect, deserve to know the truth before they decide.

And about those cameras….